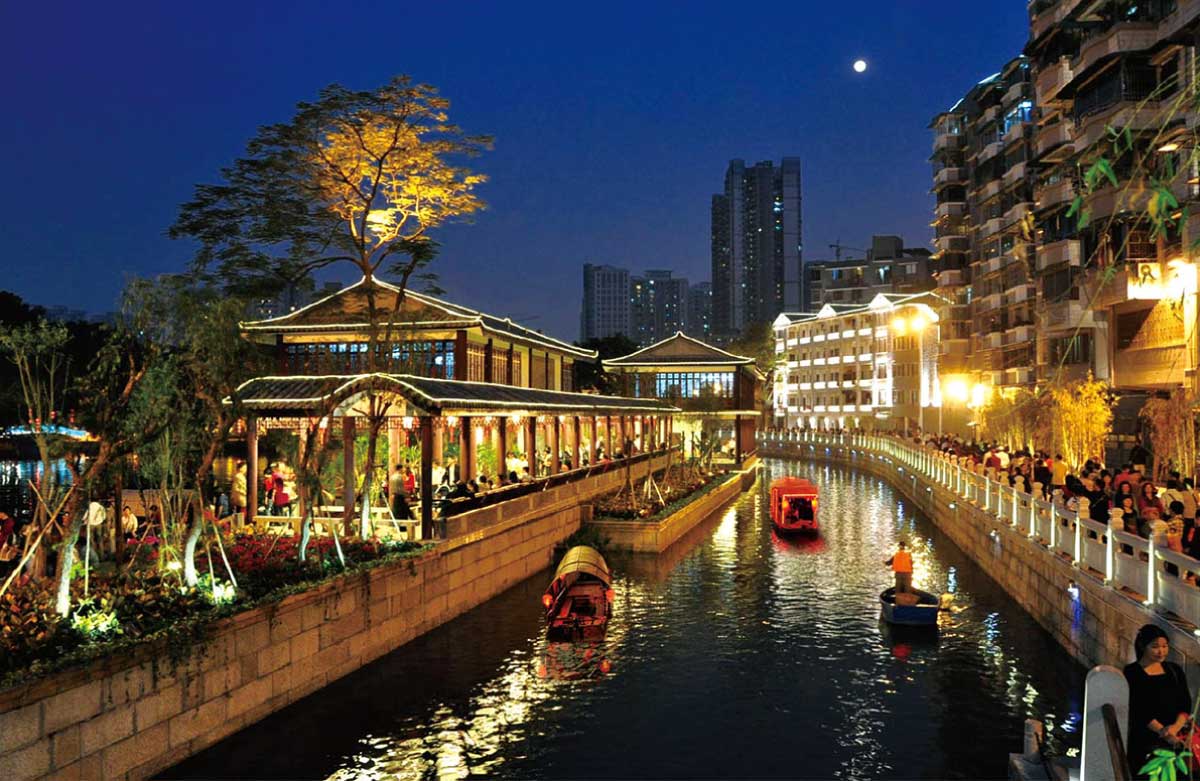 Guangzhou, is a national central metropolitan with thousands years’ of heritage, its allusion and growth is fascinating. The ‘Five-Ram Sculpture’ landmark standing on the mountain of Yuexiu Park represents a beautiful legend of five rams bringing the harvest and helping the people of Guangzhou. Call it the southern pearl or the millennium commercial port, Guangzhou has long vivid story to explore. To start with, let us go through the journey of time, culture and food, listen the voice of the history.

Dating back to the history, in Qin Han Dynasties, Guangzhou was the prosperous metropolis. Later in the Han Tang Dynasties, Guangzhou became the originating port of the "maritime Silk Road"; and in Song Yuan Dynasties, it became three times larger than world famous trade city - Venice. In Qing Dynasty, when the policy of seclusion was adopted by the feudal rulers, Guangzhou became the only foreign trade port in China. It was also the earliest foreign trade port in China, managed by the thirteen-hongs of Canton.


Guangzhou, where China's modern and contemporary history of the revolution started, is the place where Sanyuanli Militia Battle against British at the Opium Wars happened and also where Guangzhou uprising took place. Zhang tailei, Ye ting, Ye jianying led the Guangzhou uprising and set up the soviet regime. Sun yet-Sen the then president of the Whampoa Military Academy established the provisional regime three times in Guangzhou. Mao Zedong found the peasant war institution, which became backbone of large number of revolutions held here. On October 14th, 1949, Guangzhou was liberated and in 1982, the State Council announced that the ancient city of Guangzhou is a national historical and cultural city.

As Cantonese, most of us have heard about "Mr Dongshan and Miss Xiguan" - an ideal pair for marriage. Back in 1930s, Dongshan district was inhibited by strong influential officer’s families while Xiguan was commercial district with wealthy business families. The combination of power and wealth, modern and traditional, were the two epitomes of the whole commercial society of Guangzhou.

After countless vibrant passage of time, Guangzhou, the "third world capital", is in a rapid development phase. In the fall of 2010, Asian Olympic Games were held in Guangzhou, which became a milepost of city’s development. In fact, from 1987 to 2007, the city has already hosted two terms of National Games - the National University Games, the National Minority Games and the National Games for the disabled and almost all the domestic large-scale sports meeting are being held in Guangzhou. The Guangzhou International Marathon event, which is highly appreciated and participated by Guangzhou citizens, embodies the open and inclusive humanistic spirit of the city.

Guangzhou Evergrande Football Club, is well-known to every Guangzhou citizen, and has many famous players like Zheng Zhi, Muriqui, Diamante, El Eriksson etc. They have greatly improved the image of Chinese football, and created favorable external environment for the development of Chinese football. These are the good examples of the prosperity of the city which embodies in sports and culture.

Located in China’s ‘Southern Kingdom’, Guangzhou has been a bridge between China and the rest of the world since ancient times. Through the trade of the Maritime Silk Road, it has flourished for centuries, carrying the culture of the Central Plains while looking to civilizations abroad. Here, adventure and leisure coexist, exuding the charm of a millennium-old trading port. Circuitous and labyrinthine, Guangzhou is hard to define, but easy to explore.

There is a folk saying: “Born in Suzhou,
live in Hangzhou and
most importantly, eat in Guangzhou".

For many people, first introduction to Chinese food came through dining at a restaurant serving Cantonese cuisine. It's hardly surprising that Cantonese cooking was the first Chinese regional cuisine to take hold in the United States. After all, the original Chinese immigrants were mainly Cantonese coming to work on the railroads in the 1800's.

As for ingredients, Cantonese cooks are fortunate to live in tropical climate with abundant rainfall. They use a wide variety of ingredients, offer food of all tastes, shapes and colors, and they are good at innovating.

Speak of Cantonese cuisine; dim-sum comes to our minds. Shrimp dumpling (or “Ha Gow” in Cantonese) is one of the specialties of Guangzhou which has thin, transparent and smooth skin. The shrimp dumplings first appeared in Guangzhou outskirts near the creek bazaar Deli. Sampan congee, another most popular Cantonese Dim Sum is savored during the afternoon meal. In the past, congee originated from riverside family which was sold in the boats of Lychee Bay, however now, people can taste Sampan Congee everywhere. Major ingredients of it include pork, fillet, fried peanuts, sliced fried egg, and cut-deep-fried dough sticks. Later, a tasty Stir-Fried Rice Noodles with Beef is the best midnight snack for most of Cantonese people.